The results of pilot field tests of SURFOGEL® chemical at massive acidic stimulation with HCl compositions are given. The analysis showed high application efficiency of the agent in HCl - MAS technology which may be considered as a promising method of enhanced oil recovery.

Introduction. Presently a route of zone coverage extension at acidic stimulation is flow deviation which is based on creating of filtration resistance to the penetration of acidic composition in high-permeable part of reservoir. Polymeric viscoelastic liquids and reverse emulsions based on the hydrocarbon phase, aqua phase and emulsifier are conventionally used as flow diverters.

Polymeric viscoelastic liquids have a number of disadvantages such as secondary damaging plugging of reservoir during the treatment and complications connected with preparing of process solutions. Emulsions are less damaging in sense of plugging of reservoir, but their application temperature is limited and it normally doesn’t exceed 80°С. Emulsion preparation is a rather difficult process which requires supplementary equipment and the presence of hydrocarbon phase. Common disadvantage of the methods mentioned lies in the fact that flow diverters are inert to the rock and they form “parasitic” bulk. The problem of the “parasitic” bulk of flow diverters is partially solved when using gelled and emulsified acids, but their injection in low-permeable part of the reservoir is complicated by their high viscosity and high filtration resistance.

Since 2005 the HCL-MAS technology is applied in the oilfields of Samaraneftegaz. HCL-MAS technology is performed with the cyclic treatment of the producing well critical formation zone with the use of a complex balanced acidic composition with intermediate or one-time injection of the diverting (temporary blocking) composition between the cycles.  Injection of the diverting composition is performed at the pressure lower than the hydrofracturing pressure. The diverter in this case is a reverse aqua-oil emulsion having high viscosity (dynamic viscosity at 25 °C is 110 mPa·s). Since 2005 till nowadays 358 HCl-MAS well operations of this type have been performed.  But the application experience showed that this technology has limitations connected with high viscosity of the diverter. This is the reason why the technology can’t be used for the reservoirs with permeability lower than 50 mD.

Flow diverting HCl-MAS technology with gelling component. In connection with the abovementioned  imperfection of polymeric and emulsion based  diverters new HCL-MAS technology with self-diverting acidic composition on the basis of a gelling agent, a mixture of surfactants, was proposed for some oilfields. Blending of the gelling agent with hydrochloric acid allows to obtain an acidic composition which can increase its viscosity when pH increases during acid neutralization as a result of acid reaction with carbonate rock of the reservoir. Viscous gel formed in the formation “automatically” deviates of the following portions of non-spent acid both due to hydraulic resistance and due to the abrupt decrease of the reaction rate within the zone of gelling agent and carbonate rock contact. Thereby the necessity of the injection of inert to the rock amounts of liquid into the well is excluded and maximum efficiency of the acidic composition utilization is achieved.

The main advantage of self-diverting acidic composition (SDAC) is as following: being a mixture of hydrochloric acid and surfactant it does not cause any damaging blocking of the reservoir pore space.
At self-diverting acidic treatment the forming of the net of wormholes in reservoir matrix is possible which is formed not only due to the rock heterogeneity but also due to  redirection of reacting acid into the rock, which is observed as a result of gel hydrodynamic resistance increase in high-permeable zones (Fig.1).

As far as in this technology hydrochloric acid is not spent on cavern forming it causes the rise of HCL utilization efficiency. Another advantage of SDAC is its initial low viscosity being about 7 mPa·s at 20 °С. This allows to apply the technology in the reservoir with permeability up to 5 mD.
Depending on the filtration properties of the treated reservoir, it is possible to control final viscosity of acid composition by varying the concentration of acidic composition injected into the well.
The results of the laboratory research on correlation of viscosity of the composition while acid is being spent are shown in Fig. 2. 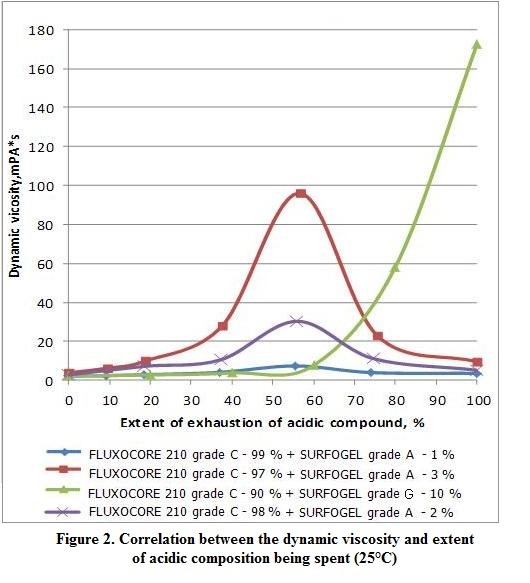 An important factor affecting the acid behavior in carbonate reservoir is the dissolution rate of carbonate rock.

Figure 3 represents the kinetics of water-saturated carbonate rock dissolution in the conditions of retarding of speed of the reaction of acidic composition. The application of SURFOGEL® grade A in the acidic composition produces more significant retarding of the reaction rate (the green curve) in comparison with the use of SURFOGEL® grade G (the red curve).

Pilot field works on  HCl-MAS with the use of gelling agent SURFOGEL® have been carried out in the following oilfields (Table 1).

Table 1. Geological and physical characteristics of the development oilfields planned for the HCl-MAS with self-divert-ing acidic composition with gelling agent

According to the requirements of the company of NK Rosneft before field tests on Samaraneftegaz oilfields the compatibility tests of the acidic solution with the raw oil had been carried out. The tests showed that hydrochloric acid with gelling agent SURFOGEL® is mixed with the base oil it didn’t form any precipitation or emulsion within 240 minutes. At stability tests acid with gelling agent SURFOGEL® didn’t produce a precipitation or turbidity within 30 minutes.

Mathematical model of HCl - MAS was developed according to which the calculations of the pressure changes on the wellhead and acidic composition consumption at pumping into the formation for the stimulation was done.

At performing HCL-MAS the injection parameters were registered such as  the pressure at the wellhead and the consumption rates  of pumped in liquid, the records were taken with 1 second interval for and on-line visualization of the process was provided. The approach described above - testing of the chemicals, modeling of the impact, parameter recording – is the standard method for the HCl-MAS and it has been used on Samaraneftegaz oilfields since 2010. This approach allowed to raise the efficiency of this type of treatment and it determined the path of further development of HCl-MAS technology.

Currently, 18 well-operations on HCl-MAS with the self-deviating acidic composition with of the gelling agent have been carried out.  By the moment of writing this article 11 wells which had been treated according to this technology were brought into the running regime. Testing results of the technology are shown in the Table 2.

Table 2. The testing results of the HCl-MAS technology with self-diverting acidic composition with the gelling agent

The technology has been tested on the beds with low value of permeability (min 6 mD) for which “conventional” technology of acidic composition diverting with applying viscous emulsions was not applicable. At performing of all well-treatment operations with the use of self-diverting system the rise of the wellhead pressure was observed at the estimated time of the acidic composition reacting with the diverter and the forming of the viscous system was observed while injection rate was maintained constant.

At EOR with acidic stimulation with different conventional flow diverters the well development issue becomes a topical problem.  After the HCl-MAS with self-diverting system the development was carried out by the swabbing technique. When taking samples of the products of the reaction from the well the samples did not show any visual signs of the diverter presence in the sample. Later laboratory tests proved that there was no diverter in the produced fluid. The time of bringing the treated wells into the normal running operation didn’t exceeded an enterprise standard time. This fact proves the theoretical and laboratory analysis which showed that after the “effective” work the self-diverting system loses its viscosity and doesn’t lead to plugging of bottom-hole formation zone, which is the conclusive advantage of the technology described.

Conclusions
1.      The efficiency of the acidic treatment with gelling agents corresponds with the efficiency of the “conventional” technologies of the acidic composition deviation (viscous emulsions, gelled polymer systems) and in some wells even exceeds it.
2.      The technology doesn’t require any supplementary technical equipment (proportioning pump) for feeding the chemical into the acidic composition on the wellhead because all operations are performed with the use of the standard equipment applied in the standard HCL-MAS.
3.      The technology is applicable for the carbonate reservoirs with permeability up to 5 mD, watering level being lower than 70 % and the formation temperature being not higher than 100°С; oil viscosity and mineralization of formation water have no critical influence on the functionality of the technology.