The article addresses the subject of increasing final permeability of hydro-fra cturing crack during well afterfracturinh completiont with the use of acidic composition FLUXOCORE®110 – destructor of fracturing fluids, clays, polymers and drilling muds. Not affecting proppant.

Hydraulic fracturing of formation (hydrofrac) is one of the basic methods of stimulation of oil production in low permeable reservoirs. When considering hard to recover reserves in the world, only hydrofrac allows the production in such oilfields to be economical in 1/3 of the cases.
Researches conducted in «RN-UfaNIPI- neft» [1 – 2] on studying the influence of polymeric fracturing fluid on the permeability of “reservoir – fracture system” showed that the size of clogged low permeable formation zone and the loss of permeability of this zone due to clogging have not so dramatic impact on the well production rate. The main reason of non-achievement of productive flow potential of the wells after hydrofrac is lower conductivity of the proppant pack due to the remaining fracturing fluid presence in the crack. And the higher is the average permeability of the formation the more significant is the effect of production potential decrease. It may reach up to 25-35%.

So the problem of crack clogging with polymeric fracturing fluid residuals and searching of the ways of its cleaning are the most important aspects of the well operation.

Injected under high pressure fracturing fluids are conventionally prepared with the use of guar gum based gels with the adding of polymer crosslinkers and polymer breakers [3]. If the polymer remains unbroken after proppant pack transporting into the crack, a extremely viscous and hard to remove jelly-like substance forms, which blocks not only the crack space but pore space of the bottomhole zone as well.

One of the basic requirements to fracturing fluids is its ability to destruct to reach the viscosity value, almost equal to the viscosity of water, this would facilitate the further gel filtration from the crack. If the gel is not destructsed completely, relative permeability is decreased and the residual gel may form obstacles the influx of formation fluid. It leads to the necessity of additional cleaning at well completion.

The most promising way of increasing the final permeability of the hydraulic fracture is acid stimulation. Hydrochloric acid aids to the destruction of complex bonds between polymer chains and the crosslinker. However long-term presence of acid in the fracture is not only harmful for the walls of the fracture in sandstone reservoir, but it also destroys the crack holding proppant [4].

To solve this problem FLUXOCORE® 110 was developed, it is meant as a destructor of fracturing fluids, clays and muds. In addition, lab researches were conducted to study the possibilities of application of FLUXOCORE® 110 in the technological process.

At the first stage   FLUXOCORE® 110 influence on fracturing gel destruction was studied. FLUXOCORE ® 110  destructor was added into crosslinked farcturing gel which did not contain FORE BRP-5 breaker. FLUXOCORE® 110 was added at stirring and adding. Then relative viscosity was measured according to GOST 6258 with the help of a funnel VU type or VBR. Then the composition was thermostated at 90°С with horary measurement of relative viscosity of the composition. The testing results are shown in Fig. 1.

It was observed that acidic composition FLUXOCORE® 110, when being injected into the fracturing fluid with the consumption of 10 ml of FLUXOCORE® 110 per 500 ml of the crosslinked gel, destroys it instantly and decreases the viscosity of crosslinked gel almost to the value of water viscosity.

Proppant as a fracture sustainer is crucial in successful hydrofrac technology application. Proppant’s structural characteristics may be disrupted by some chemicals such as hydrochloric acid [4]. The change in the structure of proppant grains caused by the acid manifests itself in the the appearance of destruction products, which are not lifted out from the proppant mass but fill in the spaces between the grains. Destruction products, accumulating in the pores, prevent the flow of the liquid and decrease the flow efficiency of the fracture [5].

FLUXOCORE® 110 effect on proppant was studied. Above all the change in extrinsic properties of proppant were determined. Proppant of grades Fores 12/18 and 16/20 was used in the experiments. Fig 2. shows the appearance of the proppant after soaking in FLUXOCORE® 110 at high temperatures (65°С and 90°С) for 2 hours. 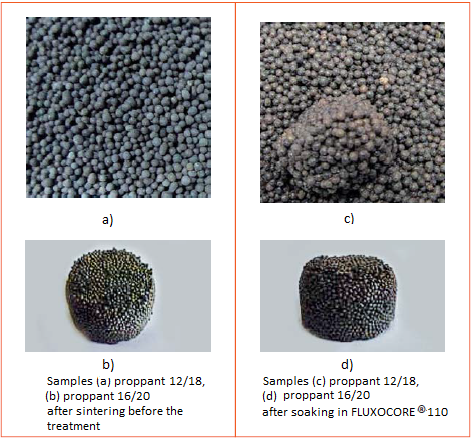 Crash-test or test for the resistance to crushing was conducted by a comparative method according to GOST R 51761-2005 [6]. It was done on Fores 16/20 proppant sample portions before treatment with FLUXOCORE® 110 and after the treatment. The test of the portions was done side-by-side.

The method is based on calculation of mass fracture of the grains crashed under the application of a specified compession load of 51.7 MPa. So called treated proppant samples were pre-soaked in FLUXOCORE® 110 for 8 hours at 90°С (reservoir temperature), the ratio proppant to FLUXOCORE® 110 was 1:2. Then the samples were rinsed with water and dried. Mass fracture of the crashed grains increased from 7.6 % in untreated grains to 13% in treated with FLUXOCORE® 110 grains. This satisfies GOST R 51761-2005 requirements, according to which the reduction in proppant resistance to crashing after acidizing should not exceed 25%.

Then filtration tests were conducted to determine the residual conductivity of the fracture. The studies were performed with using the fracturing fluid of averaged formulation both with adding a breaker and without adding a breaker and on proppant 12/18. The tests were performed on PCES-100 unit manufactured   by CoreLab Inst. (USA), the unit allows to simulate well conditions in a laboratory. The model of the cell is shown in Fig.3. 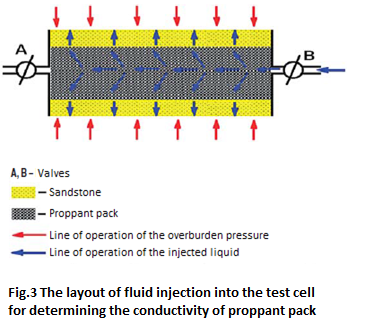 7.5 – 9.5 mm sandstone core sample plates from Oregon State were used. The testing procedure considers the forming of filtration cake on the surface of core plates and its effect on proppant pack conductivity.

Proppant loading into the cell was done according to ISO 13503-5 requirements [7]. Typical reservoir conditions of Western Siberia were simulated: effective load 35 MPa, temperature 90°С. The proppant pack conductivity was determined within 25 hours. 2% KCl solution was used as an injected fluid.

Testing of every fluid was performed in series of filtration experiments, consisting of the following stages:

1.   Determining of basic conductivity of the proppant pack.

2.   Simulation of the conditions of residual conductivity of the proppant pack after colmatation with fracturing fluid and determining of the residual permeability by 2% KCl solution.

Treatment of the proppant pack with FLUXOCORE 110 followed by determining its permeability by 2% KCl solution.
The results of filtration tests are shown in Fig.4. 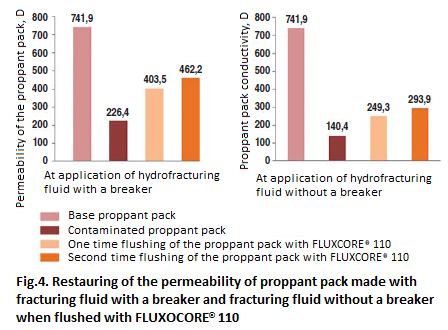 It was noticed that FLUXOCORE® 110 multiply (1.8 – fold) increases permeability of the proppanat pack containing residual fracturing fluid both with a breaker and without a breaker. The obtained results prove the high destructive ability of FLUXOCORE® 110 against fracturing fluid. Therewith the repeated treatment with the chemical increased its efficiency even more. It is should be also noted that after the repeated treatment with FLUXOCORE® 110 the reduction of proppant pack width was observed, which may be explained by the impact of the acidic solution in high temperature conditions on the core plates which built up the walls in the test cell. In this regard, it is highly recommended not to leave FLUXOCORE® 110 in the fracture for more than 4 hours.

Thus, acidic solution FLUXOCORE® 110 when entering fracturing fluid allows to break the gel instantly and decreases the viscosity of the fluid to the value equal to the viscosity of water. The permeability of the model after FLUXOCORE® 110 treatment increased 1.8 – 2.1 fold due to a more complete breaking of the fracturing gel and due to removing the reaction products from the fracture. FLUXOCORE® 110 application for fracture treatment at the stage of well completion in order to increase the residual conductivity of the proppant pack will allow to achieve the estimated technological characteristics of the wells when bringing them into development.